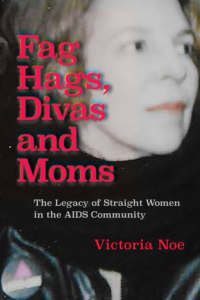 It’s been almost five years since the idea for my next book popped into my head.

On April 1, 2014, I was at the New York Public Library for a panel discussion: “The Women of ACT UP/NY! Fight Back! Fight AIDS!” A group of accomplished women - straight and lesbians - talked about the things they’d accomplished that changed the AIDS epidemic. The most significant one was arguably a four year battle to change the definition of AIDS to include women. Until 1992, the government and insurance companies defined AIDS by how it presented in men.

I knew most of the stories they told, though many in the audience, including my 19 year old daughter, did not. I remember thinking, “these stories need to be told”.

But not by me.

Surely these stories had already been told, shared with the world beyond the AIDS community. I did some research over the next 18 months, expecting to find proof that such a book had already been written.

But there was nothing.

So I gave up looking for that book and decided to write it. Fag Hags, Divas and Moms: The Legacy of Straight Women in the AIDS Community comes out March 29.

While there are a few famous women in the book, like Elizabeth Taylor and Princess Diana, most have made their contributions with little fanfare. Some of them I interviewed in person, a box of kleenex between us. Some I researched, combing through a variety of archives full of powerful testimonies to their accomplishments.

Friends, colleagues and strangers offered help from the first day I announced I was writing this book. Women I’ve never met, but who trusted me, opened up their personal archives.

I will never be able to think about women’s history month without thinking of them: the women in the book and ones whose stories I was unable to include. AIDS is not history, but the history of the AIDS epidemic will now have a new chapter full of amazing women.

At the closing invocation for the 2015 US Conference on AIDS, a minister said something that changed my life. I’d spent four days in workshops and sharing the idea for this book with people from around the country. I was exhausted, but what he said not only shook me from that exhaustion, it has defined my life ever since:

Fag Hags, Divas and Moms: The Legacy of the AIDS Epidemic is available in paperback and ebook for presale ahead of its March 29 release date from your favorite bookstore or online store, including IndieBound, Amazon, Barnes & Noble, Kobo and iTunes.
Prev Next