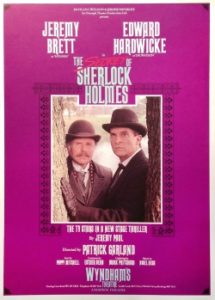 I was in London at a performance of the The Secret of Sherlock Holmes with Jeremy Brett and Edward Hardwicke. At the end of the curtain call, Brett made a brief speech. It was, he explained, the first World AIDS Day, and the ushers were about to circulate around the house with buckets, collecting donations for local AIDS service organizations. I dropped some money in the bucket and filed that idea away, not realizing I’d use it back in Chicago on the second World AIDS Day. And here we are, thirty years later.

I have a lot of friends who are long-term survivors. There was a time when long-term meant a couple of years, not decades. The fact that I have friends who have been HIV-positive since Reagan was president is a good thing. But it’s not an easy thing.

I watch them now, men and women in their 50’s, 60’s and older who expected to die long ago. The drugs that have kept them alive have done so for a dozen years or more. The toxicity and side effects are slowly revealing themselves and it takes a daily toll. Scientists and researchers are finally paying attention to their issues. These people are, in the words of one of them, “guinea pigs”.

Many have fought a variety of cancers. Osteoporosis, a side effect of the drugs, threatens quality of life. Heart attacks are happening too often. And what I have been talking about for several years - moral injury - affects them all in some way.

Moral injury overlaps post-traumatic stress in some ways, but is unique. It’s not caused by a brain injury or other physical trauma. Think of it in its most basic sense: survivor guilt.

They talk about the friends and lovers who died. Well, they talk about them now. For a long time no one talked. Ignoring their grief, pushing it away, may have been a good coping mechanism in the short term, but it did them no good. It resulted in self-imposed isolation, substance abuse, and for too many, suicide.

Storytelling has become popular, even trendy. “Tell your story so people identify with you” is the default marketing tool for businesses large and small. Storytelling in communities like military veterans and long-term HIV survivors is different than the stories told to sell perfume. It’s painful, yes, incredibly painful at times. It’s also a necessary part of healing.

To many of the people who think about HIV/AIDS at all, it is no longer a death sentence. PrEP (Pre-Exposure Prophylaxis) is a pill you can take once a day that renders the virus non-transmittable. The LGBT weekly papers are no longer filled with pages of obituaries. Once a year, on Dec. 1, news organizations dutifully cover World AIDS Day, just like they cover other remembrance holidays. On Dec. 2, HIV/AIDS is once again out of sight, out of mind.

Drug companies promote ‘living well with HIV’ and yes, that’s possible. But for long-term survivors, the insistence that living with HIV is ‘just like living with diabetes' (that is, no big deal - unless you are diabetic and know the truth), is insulting. Their health challenges - complicated not only by the virus itself but the drugs that have kept them alive - are very real.

So on this day, this one day of the year when the AIDS community can get everyone’s attention, I ask you to think of it in a little different way. Think of the men and women around the world with HIV/AIDS who have outlived their friends and lovers. They are some of the most optimistic people I’ve ever known, despite the pain of the stories they are now willing to share. They would argue with that assessment. They would insist they’re just living their lives, and indeed they are: living their lives in memory of those they lost and in service to those who no longer fear HIV as a death sentence.

I encourage you to honor long-term survivors on World AIDS Day by checking out their stories. Following are some of the places where you can find them (including my next book). The commitment and resiliency of these men and women are examples of one of my favorite Doctor Who quotes:

“We’re all stories in the end. Make yours a good one.”

The ACT UP Oral History Project

Fag Hags, Divas and Moms: The Legacy of Straight Women in the AIDS Community