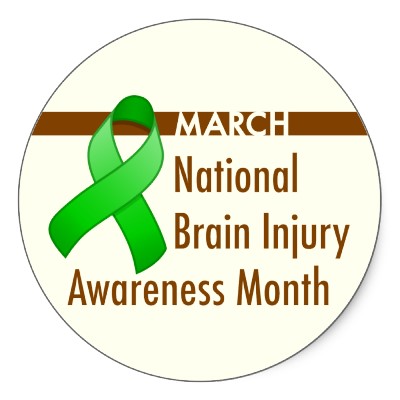 For most people, March 17 is a day to celebrate being – or pretending to be – Irish. For me, though, it’s the anniversary of a day that changed my life.

On St. Patrick’s Day, 2009, I was sitting at a red light when I was rear-ended (no alcohol involved). It was not the first time it happened to me, but this time turned out to be very different. I became one of the 2.3 million people who suffer a traumatic brain injury each year.

The car sustained very minor damage. I had terrible head pain, but again, I didn’t think much of it. That evening, I was nauseous. I assumed I was just upset about the accident. I know full well the signs of a concussion, but it just didn’t occur to me that that was a possibility. I even took a nap, and later slept through the night.

The following morning, nothing had changed: I was still nauseous with a severe headache. But when I called the insurance company I had trouble writing down claim numbers. Later, I was driving again when I realized something was very wrong. I felt like I was in a fog. I couldn’t focus. I pulled over and called my doctor, who directed me to the closest emergency room.

Six hours, a handful of x-rays and a CT-scan later, I was released with a neck brace and an order for an MRI. I kept asking if I had a concussion, and no one would answer, until the doctor who signed me out finally said, ‘well, you certainly have the symptoms’. Eight Tylenol a day and “take it easy” were my only instructions.

When we think about head injuries – if we do – it’s normally in the context of professional athletes or members of the military. But thousands of people each year who are not football players or soldiers suffer traumatic brain injuries from falls in the home or car accidents.

Those around me were used to me operating at a certain level of competence. No longer.

Initially, the effects were obvious: nausea that lasted a couple days, a neck brace I wore for a week, a severe headache for six weeks. I didn’t drive for a month, and even then, not on the highway for another week or so. I didn’t feel confident at all about my reaction time or ability to focus on the task at hand.

I couldn’t read: partly because of the headaches, but also because I couldn’t retain what I read. Watching TV posed the same challenges: I couldn’t remember characters or plot lines.

When I talked, my headache got worse. I could say two, maybe three sentences without having to stop because the pain spiked. Talking also made me short of breath. I had to almost whisper to avoid pain.

I thought I couldn’t remember things, but in truth, they never stuck in my head to begin with. They weren’t there to forget. Someone would say something to me and I’d nod and agree, when in fact, by the time they finished their sentence, I had no idea what they’d said. I was constantly reminded of things I had no memory of hearing the first time.

After a year, I gave up a 15 year, award-winning sales career. I couldn’t remember prices or procedures consistently.  I made stupid mistakes submitting orders, costing me money out of my own pocket. That added to my stress, which increased my confusion, which added to my stress.

Six years later I feel the effects to some extent almost every day. If I can control the stress - a big “if” - I have a truly normal day. If not…not. I’m still reminding those around me of actions that can trigger problems for me. But I’m resentful that I’m still reminding them. I know they’re tired of dealing with this, but they have no concept what it’s like to be me.

A brain injury is “invisible”. You wouldn’t hesitate to sympathize with a person whose arm was in a cast, or who had to use crutches. But because others can’t see what you’re dealing with, you can find yourself the butt of jokes – even from those close to you.

You may have a friend who has suffered a brain injury. You may even have made jokes about it, and I imagine they smiled when you did. But I can assure you that they died a little inside.

Because I didn’t pass out or fracture my skull, my concussion was not taken seriously by my doctors. What care I’ve had has been mainly self-directed. I will be forever grateful to the people I’ve seen for cranial-sacral therapy and the wonderful staff at the Rehabilitation Institute of Chicago.

I won’t lie: I cried a lot. I grieved for what happened to me. I grieved for the woman I would no longer be: the dependable, multi-tasking, entrepreneurial over-achiever. It took months, but I accepted that I was different now: no more multi-tasking. As it turned out, that wasn’t all that bad.

About five months after the accident, I was suddenly able to start on the book I promised my friend Delle I’d write. My creative side – long dormant – was unleashed. So I guess I owe something to the nasty little man who rear-ended me: a new career.

I hope you’ll take the time to check out this link about Brain Injury Awareness. And next time you talk to a friend who has suffered one, forget about jokes. Ask “how are you doing?” And listen. It will mean the world to them. Trust me.
Brain Injury Fact Sheet
Prev Next