Friend Grief Without (too much) Guilt 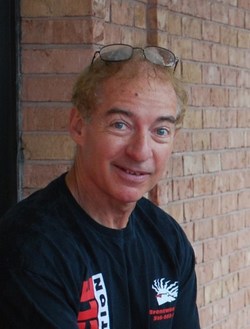 About a month ago, I acted on a whim. It was something I’d thought about doing for a while, but hadn’t done. What possessed me, I have no idea.
During college I lost touch with the guy I took to prom junior year. We did a couple musicals together, and he also came with me to my senior Christmas dance. We had fun together (not to mention my first kiss). Dan was often overshadowed by his popular older brother, a very talented actor and pianist. But I think one of the reasons Dan and I got along so well was that I liked him for himself, not his brother.
I knew he’d gone to work for one of the airlines after college, but otherwise, did not have any direct contact with him for a long time. A couple years ago that changed when we became friends on Facebook. We sent birthday wishes and liked each other’s updates, but that was the extent of it.
In October, I was visiting my mother and realized I’d driven by the business he opened after retiring from the airlines. I remember thinking “I should stop by and say hi.” Then I thought, “No, that’s stupid.”
But on a trip in early November, I decided to risk feeling stupid or even unwelcome. Dan was working in the front of the store, and as soon as I walked through the doorway, he smiled. “I’d recognize you anywhere, Viki.”
He invited me to sit down and we spent some time catching up on what we didn’t know from Facebook. I told him I’d be back in town this week and we talked about maybe getting together outside of his work day.
This past Saturday a very cryptic post on his Facebook page showed up in my notifications. It was from a man he’d worked with, expressing his gratitude for their friendship. In fact it was so cryptic, it took me a few readings to realize it meant that Dan was dead. It took the rest of the weekend for confirmation that indeed, he’d died suddenly.
It wasn’t that I had any great expectations of what getting in touch again would mean. I just assumed in November that he’d still be around in December.
I was wrong.
Honestly, I’ve been pretty weepy all week, though I haven't had time for the cry that I know I need. I will, I promise, probably tonight or tomorrow when things calm down a bit. I’m going to miss his memorial service on Saturday, because, as usual, I’m 300 miles away.
So, yes, I’m grieving right now. But I’m grateful beyond words that I acted on that whim. Even though I had no reason to believe he wouldn’t be his usual charming self, I did worry that I’d make a fool out of myself.
Do I wish I’d seen him sooner, maybe when the idea first popped into my mind? Of course I do. But I did see him and talk and laugh and hug. And as much as I wish there would be more of that, I’m grateful that I don’t feel guilty. Had I not seen him, had I assumed I could stop by sometime in the future, oh, yeah: what I would feel most strongly now would be guilt.
I wish we would’ve had more time together. He was, without a doubt, one of the sweetest, kindest, funniest men I’ve ever known. I don’t think I fully appreciated that at 16, but I sure do now.
There’s probably a Dan or two in your life: a friend you’ve lost touch with, not because you had a fight, but because life took you in different directions.
If you’re reading this, and someone pops into your head who fits that description, please reach out to them. You have my permission to use the holidays as an excuse. Don’t wait until tomorrow.
Because tomorrow might be one day too late.
Prev Next