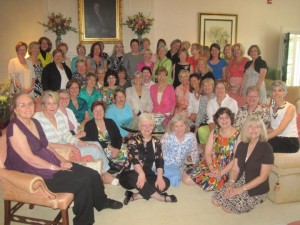 When a tragedy occurs – natural disasters, 9/11 – my reaction is to soak up the media coverage.  I need to understand what happened – the how and the why.  Not everybody feels that way; some people prefer to stay as detached as possible.
Some things have become cliché when people are interviewed about those who have died.  One we often hear in describing a friend who has died is ‘he was like a brother to me’.  Certain groups – like firefighters or police officers – refer to those with whom they work as ‘brothers’ and ‘sisters’.  They work together, have each other’s backs, sometimes live together.  They’re more than ‘just’ friends.  I’m not sure when it was – probably not long after I started writing my book – that that phrase started to bother me.
Many people believe that saying someone is ‘like family’ elevates them:  puts that relationship on a higher level than ‘just’ friends.

This photo was taken at my latest high school reunion.  The women in the photo are not my sisters; I have a sister.  They're my friends - some closer than others, to be sure - but they're my friends.  And I don't take that designation lightly (no matter how Facebook defines it).
What’s wrong with saying someone was ‘like a brother’ to them?  Nothing.  It’s never meant as an insult; rather as an endearment, a way to honor someone and emphasize the importance of that friendship.
But what, I wondered, is wrong with just saying ‘he (or she) was my friend’?  Why do people feel that calling someone a friend isn’t enough to explain the importance of their relationship?  Why is calling someone your friend not the greatest compliment in the world?
Friday – “My Name is Alex”
Prev Next