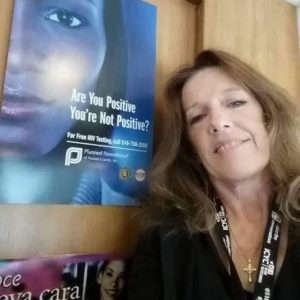 Another woman in my book, Fag Hags, Divas and Moms: The Legacy of Straight Women in the AIDS Community, Nancy Duncan, has been living with HIV for going on 35 years, working and volunteering in the HIV field for 22 years.  She’s a New York State Certified peer worker and has been doing HIV test counseling for 13 years with Planned Parenthood of Greater New York.  Nancy also works at the Center for AIDS Research and Treatment at Northwell, where she produces a monthly newsletter and facilitates a medication adherence group.  In addition, she volunteers on the Nassau/Suffolk HIV Health Services and is involved in many other endeavors in her community to stop HIV and end the epidemic.

As a woman who has lived through and survived the AIDS epidemic, it seems what’s going on now with the COVID-19 pandemic has brought back some eerie feelings I’d experienced in the past but it’s not quite the same.  My immune system is stable, but I do fear getting this just like most people.  I’m trying my best to be as safe as I can be, but I thought I was being safe in 1985 when I contracted HIV.

It’s hard to believe what’s happening now because this new virus is much more transmittable and so much is still unknown just like when HIV first emerged into the population almost 40 years ago.  I fought so hard to stay alive back then and now I feel like I’m fighting again against an invisible enemy trying to kill everyone.

The government has taken steps to reduce the transmission by social distancing: asking people to stay home, to wear masks. They’ve acted fast on it, though not fast enough in my opinion.  The response here is very different than the government’s very slow reaction to an unknown disease that was killing gay people and intravenous drug users beginning in 1981. HIV/AIDS was pretty much ignored by the president at the time and wasn’t given the attention it needed and deserved, hence it took years to find a treatment that actually worked to keep it under control. Way too many people died in the interim, which is quite sad to say the least.  There is a lot of money to be made in the HIV industry, people are still contracting it and it seems as though there is no end in sight.

I do know that unlike the response to HIV/AIDS, our government and people in general are not ignoring COVID-19. This time it was clear from the beginning that no one is immune, no matter what their lifestyle or privilege may be. That is the big difference here. There are some states that still have HIV criminalization laws for people who knowingly spread it.  I question why there aren’t any legal consequences for people who are not obeying these new rules of social distancing - wearing masks, staying home - and are out there possibly putting others at risk for a life-threatening virus. It just doesn’t seem fair!

Nobody knows yet what the outcome will be or when this will be over.  I see they are working much faster for more testing and possibly a vaccine for this than they ever did for HIV. I hope this all ends soon because it seems like a very bad dream.

I miss seeing my son, family and friends.  I have been fighting to keep HIV from killing me for almost 35 years now and I hope to be able to say one day soon that I survived another plague and am even stronger for it.
Prev Next