Time to Carry On a Friend's Work 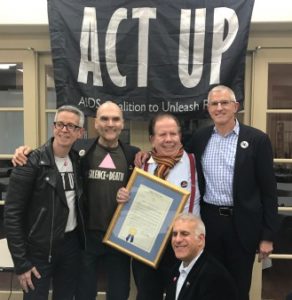 I had a blog post ready for this week. Well, not quite ready, but it was getting there. Then on Tuesday, a post popped up in my Facebook newsfeed:

A man of great heart, deep conviction, and scalding wit has been taken from us. Veteran AIDS activist and ACT UP New York member Andrew Velez died today (May 14) in a Manhattan hospice. He was 80.

It stopped me cold (partly because I had no idea he was anywhere near 80). I knew Andy had had some serious health challenges last year, though I didn’t think much of it. The community was rallying around him and he seemed to be in good spirits. I didn’t know - or had missed the news - that he’d suffered a serious fall last month, so this announcement was a shock. Others who were close to him knew, but kept it private. I respect that.

Andy was at the first ACT UP/NY meeting I attended six years ago. In fact, Andy was at pretty much every ACT UP meeting from the first one in 1987. He was funny and bitchy and did not suffer fools gladly. I considered him one of the most effective advocates in the history of the AIDS epidemic. His obituary, which you can read here, recounts his accomplishments. It’s hard to believe one person could do all those things, but Andy could. He was clear in his focus, always, even if that focus was fun.

How do you do that kind of work for 30+ years and remain sane? It’s a conversation I’ve had a lot lately, and there is no easy answer. Some of us left the community and returned. Others left and did not return. Still others stayed in, but paid an emotional price for their involvement. Self-care for activists is not a topic that comes up very often, but it should.

I know long-time activists who will insist that their outlet was/is sex. Nothing wrong with that. Maybe that was Andy’s answer. But I suspect it was more than that.

Long ago, two women who worked in hospice attended a workshop I was teaching. At a break, I asked them how they handled working in such an environment, one in which their patients always died. “You have to have a new definition of ‘success’,” one of them told me. And I think that was Andy’s secret.

He certainly knew he couldn’t end the epidemic, on his own or with his comrades in ACT UP. But he knew what he could accomplish with them. He knew any change was progress, and he helped make a hell of a lot of change.

I always knew when I saw Andy that I would learn something and I would laugh. And what better legacy is that for anyone? There was simply no one like him. It’s up to all of us to continue his work, until the epidemic is finally, finally over.