Why Writers Should Step Away from the Computer

My table at the Illinois Libraries conference[/caption]

Now and then online I come across conversations where writers bemoan the current state of publishing, which requires them (no matter how they are published) to market themselves. They are expected to host websites, build their platforms, tweet, post, comment, share. For those of us who are used to being self-employed, marketing is a normal part of doing business. But for others – who just want to write! – it’s a challenge and a burden that’s sometimes resented.

I’m not one of them. I could blame it on having a master’s degree in theatre, or just that I like talking. But I hope that if you’re a writer who doesn’t like to appear in public, you’ll keep reading this, because I'd like to share some of what I learned from the people I talked to in Peoria and Princeton last week: [caption id="attachment_1158" align="alignleft" width="170"] 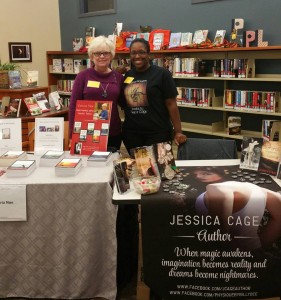 With Jessica Cage at the Princeton Library[/caption]

The internet can bring out the worst in people, but sometimes it just masks the real person. Although the members of my team (editor, formatter, cover and website designers) are all in different states and I’ve never met them in person, we work well nonetheless. But I feel like they’re the exception.

The writers I trust the most, admire the most, learn the most from, are those I’ve met in person. Maybe we attended a conference together, maybe we had adjoining tables at a library author event, maybe we heard each other speak. There’s something about looking into a person’s eyes that tells you immediately if that’s someone you trust.

The same with our readers. To have someone come up to your table and say “I love getting your newsletter every Wednesday” or “This is perfect for my friend” changes your day. And it’s a lot sweeter when you see their faces instead of a thumbs-up emoji on Facebook.

Writing is as solitary as it gets, and for good reason. Days go by when we wonder if, in the words of the song from 1776: “Is anybody there? Does anybody care?”

I’ve been on the receiving end of tremendous support lately online. But nothing compares to being at a library in a rural community when a nurse who works with HIV patients sees my book about losing friends to AIDS, looks me in the eye and says, “You really get it.”
Prev Next