I planned to turn over my blog again this week to another straight woman in the AIDS community. That particular post will have to wait a bit. Instead I thought it would be better to report on my day (the first of two) in Washington, DC at AIDSWatch. It's no accident, in my mind, that the conference is presented by the Elizabeth Taylor AIDS Foundation, named for once of the fiercest advocates in the history of the epidemic.

I went last year, joining a few hundred people from around the country to advocate for funding and legislation important to people living with HIV and AIDS. It was my first time lobbying in the capitol since 1989, when I advocated for the first Ryan White Care Act. A lot had changed in 27 years. This year, though, is very different.

The radical changes in government at the federal level, coupled with a resurgence of activism for a variety of causes, resulted in a sell-out crowd of well over 600 activists this week. We trained today for the visits on the Hill tomorrow. Though the American Health Care Act was defeated on Friday, that was just one battle in an ongoing war to protect people with and at risk for HIV.

So what does that have to do with women? 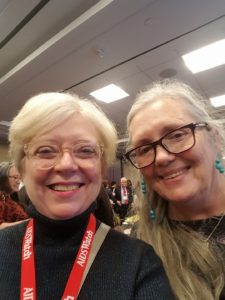 I talked to a number of women today (that's me with the amazing Wanda Brendle-Moss). Some of them will be in my next book (Fag Hags, Divas and Moms: The Legacy of Straight Women in the AIDS Community). The issues facing straight women in the community haven’t changed all that much since the beginning of the epidemic: It can be a little depressing to read that list because in a lot of ways nothing has changed since the beginning of the epidemic. But the good news is plentiful and inspiring. 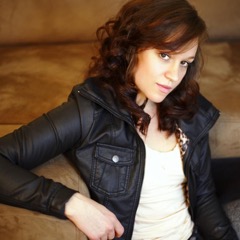 There is a new generation of activist: young women who demand healthy sex lives, who demand equal access to drugs and treatment, who demand that their voices – especially in advocating for women who are homeless, addicted, abused and scared – be heard. And that gives me hope.

“Not everyone knows what you know,” is something I say all the time to people who disparage millennials or other groups of young people. It is the responsibility of those who are older to share our experience and knowledge with those who will take our place on the front lines. At AIDSWatch I’ve seen a lot of women doing just that: sharing what they know, training younger women to end this epidemic once and for all.

I never thought AIDS would still be around when I reached this age. I never thought there would be a need – a desperate need – to head to Washington and our state capitols to demand continued funding for services that not only take care of those with HIV, but stop the epidemic in its tracks. And I never thought women would still be fighting additional battles – stigma, misogyny, abuse – that were all too common three decades ago.

But like I said, I have hope. The energy at the Marriott Georgetown could’ve lit up Times Square for weeks. I can’t wait to go up on the Hill and hear stories of others exercising their rights as citizens to advocate for issues that affect their lives. And I guarantee you, the fiercest advocates will be women.

As always.
Prev Next