Friend Grief and the Military 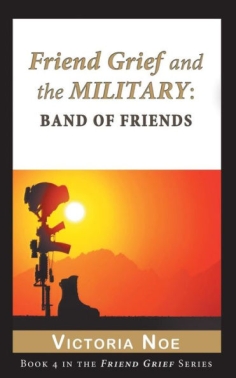 "They were killing my friends." That was how Medal of Honor recipient Audie Murphy justified his heroic actions in World War II. As long as there have been wars, men and women in the military have watched their friends die. Experts warn that delaying our grief will complicate our lives. But what about those who have no choice but to delay it until the battle is over? In "Friend Grief and The Military: Band of Friends" you'll meet military and non-combatants who struggle with the grief and guilt of losing their friends. You'll learn, too, in the amazing ways they help each other, that "leave no one behind" is a life-long commitment.

"Friend Grief and the Military: Band of Friends is a short and simple book about a complicated problem faced by all who are in and are touched in some way by the military in a time of war. Grief is complicated, dealing with it even more so...Many still believe PTSD and such are bogus, not so, and the far reaching effects of war on those involved in many ways is touched on in Noe's book, worth a look, worth the read". - Military Writers Society of America

"What amazed me...is the insight and clarity that you have of the military culture, ethos, and invisible wounds of war...You have an empathy that far exceeds many mental health, medical, social, and research professionals.  Your use of first-hand witnesses from thousands of years ago to the present are masterfully presented in a manner that makes the subject matter explanation almost intuitive to the reader". - Major General James Mukoyama, Jr. (ret), US Army, CEO and Co-Founder, Military Outreach USA