A Reflection on The Great Believers 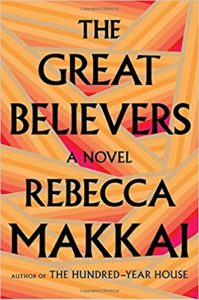 Since Rebecca Makkai doesn’t need another rave review of her new book The Great Believers, I thought it more appropriate to share my reaction to her sweeping novel that links the AIDS epidemic in 1985 Chicago to the art scene in 2015 Paris.

When I heard it was coming out, I was less than thrilled. I was almost three years into the research and writing of a nonfiction book about straight women in the AIDS community. Although her book is fiction - and overall, one of the best novels I’ve read in a very long time - I was momentarily concerned. Not concerned: panic-stricken. Another straight woman from Chicago writing about the AIDS epidemic? What are the odds? After an hour my anxiety subsided and I started reading her book.

Most people reading The Great Believers will not remember what Chicago was like in 1985, in the early days of the AIDS epidemic. But I do remember it, all too well.

There were no drugs, no effective treatment. The ‘test’ was just becoming available, and just like some of the characters, people wrestled with the logic of taking it. What would be the point? To confirm that you’re going to die rather quickly? To warn others, changing your relationship with them forever? To put yourself at risk of exposure, possibly losing your home and job? Wouldn’t it be better to live in temporarily blissful ignorance?

In today’s world of near-instant test results and the miracle of drugs that render HIV undetectable and untransmittable, it’s hard to imagine the wartime feel of the 1980’s. Test results took two weeks. Most funeral homes refused to handle the bodies of people with AIDS. Churches refused to perform services, nursing homes refused admittance, hospital personnel refused to touch their patients. Irrational fear was epidemic. If someone dropped out of sight, the natural assumption was that they were either hospitalized or dead. Because more often than not, that was the case.

Most of the characters we follow in the Chicago scenes (stretching from 1985-1990) are young gay men. We often learn their HIV status as they do, and though it’s a virus that doesn’t discriminate, it doesn’t always make sense who receives a positive test result. One character, who reappears thirty years later in Paris, managed to survive. His presence is surprising enough to make the reader (and at least one character) wonder why.

As I said, because I remember the places and events in the Chicago scenes of the book, my reaction to it is more personal than most readers. Some of the scenes triggered flashbacks that made me wince; others made me smile.

Near the end of the book, yet another memory is triggered for Fiona as she struggles to re-establish her relationship with her daughter in Paris. It’s a brief memory with only one sentence recalled. A three-word sentence that made me gasp.

No spoilers here. I won’t say what it was because it defines Fiona. It also defines me and many others - men and women - who identify as long-term survivors. The fact that Makkai  - who was 7 years old in 1985 - knew this, whether it was from her research or just her obvious writing talent, is quite remarkable. If you’re a stranger to the story of the AIDS epidemic, you may regard that sentence as another one of Fiona’s excuses. But it’s not. Trust me.

It’s still with me a week later: the flashbacks, not just to that time, but to various moments in my life in those ensuing thirty years. “We’re all damaged,” a friend in ACT UP/New York told me a while back. Indeed we are. But now, thanks to The Great Believers, I can explain why.