An Embarrassment of Riches 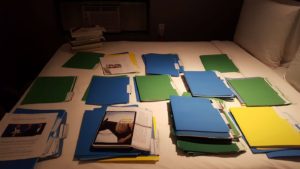 You’d think I’d be used to this by now.

I write nonfiction and over the past eight years I’ve done research on a variety of topics related to my books: moral injury, the AIDS epidemic, 9/11, military procedures, men’s health and always, grief. There is no shortage of material available on the internet, in films and TV shows, in poetry and song lyrics, in clinical trials, books and magazine articles.

One of my guilty pleasures is finding a resource that is both appropriate and obscure. Sometimes they’re found in books that have been out of print for decades; I found one in London last month at Gay’s the Word bookstore.  Sometimes they’re interviews in now-defunct publications. I have one of two reactions: either “I forgot about that” or “I didn’t know that”. To be honest, that’s the kind of reaction I hope for from my readers.

There’s a lot of that in the next book. A lot.

I knew when I started writing Fag Hags, Divas and Moms: The Legacy of Straight Women in the AIDS Community that this would be the case. I knew a year ago I could write 50,000 words just on the straight white women in New York City who have had an impact on the AIDS epidemic. Tempting though that may be, my book is much more diverse.

There will be, as I originally assumed, well over 100 women in the book. Some will have brief mentions; others will have multiple pages devoted to them. They are from around the world, all ages, living and dead. My office is full of overflowing file drawers, jammed book shelves, stacks of article reprints.

So many women, so many terrific stories. And yet…

I’ve already started to brace myself for the inevitable outrage: “Why isn’t X in your book?” A lot of the stories in the book were suggested by people who have a personal connection to these women. They want to see those stories shared in the book. But some of them will be disappointed.

I feel awful about that.

I feel awful that even with the best of intentions, no book can include all of them. Well, awful and pleased, because that means there are a lot of stories that deserve to be told. So I’m giving some thought to addressing how to share the ones that don’t fit in the book.

What I hope the book will do, ultimately, is to encourage other straight women who have worked or volunteered in the AIDS community to tell their stories. My book is not the only way to do that, so I hope those women find their voices. Whether they write their own memoir, or make a StoryCorps recording, or sit down for an oral history project, I want them to know that there is power in their stories.

We’re well into the fourth decade of the epidemic. The recognition of what these women accomplished - and continue to this day - is way overdue. I can get the conversation started, but it won’t end with my book. At least I hope not.