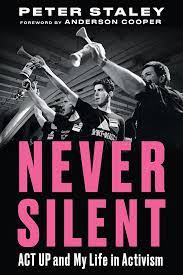 It’s hard to review a book written by a friend.

You want to be publicly supportive so that others will buy their book. You know the time and effort and challenges that led to words on the pages. You want to like it. Sometimes, that can be a challenge in itself. I’ve read books by friends that were badly written, badly edited. Should I keep my mouth shut and leave the criticism to strangers? Luckily, I did not have to consider that with Peter Staley’s long-anticipated memoir, Never Silent.

Staley has been a public face of the AIDS community for over 30 years. His involvement in ACT UP, which included helping cover bigoted congressman Jesse Helms’ house with a giant condom, is well-known. There were dramatic actions staged to protest government inaction and hostility, demand speedier access to experimental drugs, and shame drug companies determined to bankrupt desperate patients. What is less well-known is how he became an activist.

Working in high-pressure jobs on Wall Street and closeted even to his family, Staley was surrounded by homophobia and the very real consequences of being outed. In 1986, the Supreme Court denied the right to privacy for the LGBT community. Misdemeanor and felony sodomy laws were on the books around the country, so an arrest could end a career and destroy a reputation Being closeted was necesssary self-defense for many.

The LGBT community was already fighting back, triggered by the Stonewall Inn ‘riot’ in 1969. The 70s ushered in a time of sexual freedom not previously enjoyed in that community, and no one wanted to lose that progress. But then came 1981, when a strange, frightening ‘gay cancer’ became known. Staley was diagnosed with HIV in 1985, a time when life expectancy was often measured in months because there was no effective treatment and no cure. Staley, like everyone facing a life-threatening diagnosis, had a decision to make. It was less about accepting what seemed inevitable than imagining a path forward that made sense. For him, it meant fighting any way he could, for as long as he could. To do that, he would have to come out to his family  and boss as gay and HIV-positive. It wasn’t an easy decision, but it was necessary for his survival. That’s what led him in 1987 to his first meeting of a new group called the AIDS Coalition to Unleash Power: ACT UP.

Along with Sarah Schulman’s Let The Record Show, Staley’s book gives a fascinating look into how ACT UP was organized, how it functioned and ultimately, what led to bitter divisions. If the book reveals a chaotic, often contentious atmosphere, it’s to be expected. Many of the people gathering on Monday nights for the main meetings, or other nights for committee meetings, were dying. Many others were friends and relatives and caregivers of people dying horrific deaths from a virus no one knew how to control. They raged against an indifferent and sometimes hostile government, insurance companies, religious institutions, and the medical establishment. The rooms were filled with creativity and rage and, yes, plenty of cruising.

For those unfamiliar with the now-legendary actions led by ACT UP in the late 1980s and early 1990s, Staley’s attention to detail will leave you feeling like you’re watching it unfold in real time. These accounts often read like a thriller: Will our fake stock market IDs alert security before we can get onto the trading floor? Will the police stop Peter from climbing up on the overhang at NIH to unfurl a “Silence=Death” banner? It may be surprising that not every action was wildly successful or universally beloved.

The theatricality of many of those actions earned them media coverage and became a trademark of ACT UP. But Staley shows time and again that beyond the showmanship, these were complicated plans that could - and sometimes did - implode. And that’s okay. If something didn’t work, they found a new approach. They met with adversaries around conference tables, and shut down the New York Stock Exchange.

It was perhaps inevitable that AIDS faded from the public consciousness when the ‘cocktail’ of drugs was introduced in 1996. ACT UP attendance plummeted, and chapters around the world ceased meeting. But the virus did not leave us. Neither did the determination to end it, each of us in our own way.

In describing the people involved in AIDS activism over the past 40 years, Staley proves that while having a lot of money or famous people on your side is helpful, there is a role for each of us to play. You don’t have to get arrested or testify before Congress to earn your chops as an activist. That diverse coalition is made up of people like you and me who are passionate about ending this epidemic once and for all. There are many ways to contribute. It’s a matter of matching your strength to the need.

But Peter’s memoir is not just about ACT UP. It’s about the physical and emotional toll of being a long-term survivor. It’s about his addiction to meth, and how that drug fueled an uptick in HIV infections among gay men. It’s about finding new ways to advocate for his community, whether it’s a lawsuit against pharmaceutical giant Gilead, or regular phone calls with Tony Fauci. Few people - including Fauci - escape criticism, and some of Staley’s harshest criticism is directed at himself.

When Peter first announced he was writing his memoir, my first reaction was 'I already know more than I ever wanted to know about your sex life'. Well, now I know more. But I also know just how deeply decades of personal losses shaped his life.

There are many lessons in Peter’s memoir: coming to terms with your true self in a world that’s openly hostile and often dangerous; finding purpose when you live a longer life than you expected; channeling the losses that felt relentless into a life of purpose and joy.

Like I said, it’s hard to review a friend’s book. Peter’s story is both an inspiration and a cautionary tale. It’s a how-to and a how-not-to on activism, and on finding your way as a gay man in a society that doesn’t give a damn if you live or die. In the end, it’s a tribute not just to Peter, but the people who showed him the way.