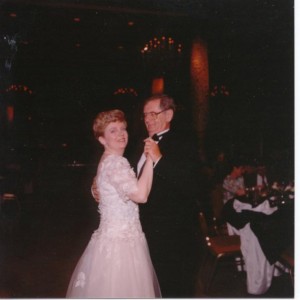 Our dance at my wedding[/caption]

I’ve written before about my father’s friends. But today is ten years since he died, and I’ve been thinking more about men’s friendships.

I remember those men when I was growing up: loud, sometimes profane, argumentative and fun. I was born in the 50’s; I still call then “Mister”. I never felt comfortable calling them by their first names.

You know how it is with the generation older than you: they’ve always been around and you assume they always will be. But, of course, that’s not true.

Daddy was the first in his group to die, a few weeks before his 77th birthday. I don’t know how much they talked about his illness when I wasn’t around. I do know that as shocked and worried as they were, they did not abandon him.

In some ways, they did what a lot of men do best when something bad is happening: they ignored it. They were still loud, profane, argumentative and fun. That had to be a comfort to my father, even as he pretended everything was fine.

And when it mattered, they showed up – one within the hour – after we finally called in hospice care. Another – the loudest, funniest, most profane and argumentative – took one look at Daddy in his hospital bed in the living room and bolted for the front porch to fall apart.

They came to the wake and served as pallbearers. They picked up my mother for occasional group lunches. They took her out to breakfast.

The group is smaller now, and in a few years will be gone completely. My father was a good friend to them and that love was returned, though not perhaps in ways that were obvious. I’ll always be grateful for that.

To have a glimpse into male friendship is sometimes to explore an alternate universe. There are things going on there that I just don’t get. But as I’ve interviewed men over the years for the Friend Grief books, I’ve found that any notion of men having only superficial friendships is simply wrong.

Their friendships are just as complex as women’s friendships, and they grieve just as deeply when those friends die. In fact, they may grieve more deeply because society rarely allows them to express that grief.

I thought it was a disadvantage, not being a grief professional or a therapist. I was afraid when I interviewed people that they wouldn’t take me seriously. But I quickly learned that people who grieve their friends just want to be heard. They want their grief to be respected. And they want others to know how much they loved their friend.

The men I’ve interviewed have told some amazing stories. You’ll learn about them in the final book in the series, Friend Grief and Men: Defying Stereotypes.  My hope is that after reading it, you’ll never find reason to disrespect the grief any man feels for his friends.

That book and this post are dedicated to my father and his friends: Mr. Guthrie, Mr. D’Angelo, Mr. Salmieri, Mr. Coughlin, Jake Taylor (the exception to the “mister” rule, though almost always referred to by his full name). Someday they’ll all be together again, to tease and joke and solve the problems of the world while drinking scotch and listening to Sinatra.

And that will be a very good day.
Prev Next