Finding Grace on a Metro Platform 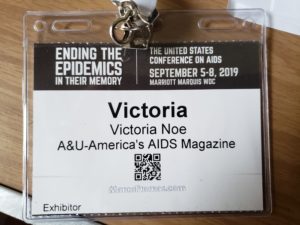 It's been quite a while since I blogged. The absence was not intentional. Two weeks of travel, the death of one of my dearest friends, and severe bronchitis have brought my daily life to a screeching halt. But in the midst of so much stress, there have been some wonderful moments. None as wonderful as this:

I spent the weekend after Labor Day in Washington, DC at the US Conference on AIDS. There was a lot of focus on long-term survivors, as well as how to serve the unique needs of those aging with HIV. As usual, it was an intense 3-½ days, which this year included a book signing in the A&U Magazine booth for the book I’d first started working on at that conference in 2015 (Fag Hags, Divas and Moms: The Legacy of Straight Women in the AIDS Community).

My mind was a little - more than a little - foggy as I waited for my Metro train to Union Station so I could go up to NYC for a few days. I set my backpack on the platform next to my suitcase. It wasn’t until I made that connection and was about to get off at Union Station that I realized I’d left the backpack behind.

Panic does not fully describe how I felt. The backpack contained my netbook, financial records, my spare Epipen, medication and all my charging cords. As the sympathetic station master called around to find out if anyone had turned it in, I mentally calculated what it would cost me to replace it all (trust me, you don't want to know). In all the excitement and noise in the station, I didn’t realize I’d gotten a phone call. There was a voicemail: a woman had found my backpack. I called her immediately. She was no longer where I’d left it. She’d traveled on and didn’t have enough money on her card to come all the way to Union Station. Could I meet her?

Of course the answer was yes, but I admit to being more than a little wary. I let my husband know what I was doing, and sent a message to myself to document my destination.

It took a bit to get there, the second to last station on the green line. But when I came down the escalator, I saw her waving my backpack to get my attention. She could not have been more gracious. I opened up the bag to do a cursory check: not that I assumed she’d taken anything, but it was possible she wasn’t the first person to open it.

“There was a time,” she admitted, as I handed her $40, “that I would’ve tried to sell everything in there. But I’m not that person anymore. And I wanted to meet you.” I was confused. I knew my business cards were in the bag; that was how she’d found my phone number. “I’m HIV-positive.”

I gasped: my nametag from the conference was in the backpack.

“Are you getting services? Are you okay?” I asked when I found my voice.

We parted with a hug, and I got to Union Station in time to make my connection. I'd been more than annoyed when I made my reservation for the Northeast Regional: earlier trains were booked up, so I was taking a later train than was my habit. Had I left the conference earlier I may not have left my backpack on the platform. I certainly would never have met Chris.

At that 2015 conference, on the last day at the closing gospel brunch, one of the ministers said something that I've never forgotten:

The unexpected meeting at the Metro station reminded me once again that he was right. And that you can find grace in unexpected places.
Prev Next