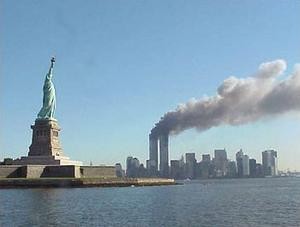 It’s the time it takes to go from the labor/delivery room to sophomore year of high school.

It’s hard for some of us to believe: 2016 marks the fifteenth anniversary of the terrorist attacks of September 11, 2001. But this year, as with every passing year, I realized just what that means: fewer and fewer people remember.

My daughter graduated from college in May. She was seven, in second grade, when the attacks occurred. Her memories are what you’d expect from a child surrounded by adults who were in shock. She remembers everyone being sent to the gym for a special mass at school. She remembers we turned off the TV every time she walked in the room. She remembers a high school classmate of mine died in the South Tower.

Those of us who are older remember where we were when we heard the news. I was in my car, sitting in front of my acupuncturist’s office after having just dropped my daughter off at school. I was listening to the radio, to the normally goofy morning anchors recite news bulletins with strained voices. All I knew was that the World Trade Center had been attacked. By the time I came back out to my car an hour later, the towers had fallen, the Pentagon attacked and a plane had possibly crashed in Pennsylvania.

My parents had vivid memories of Pearl Harbor, which happened eleven years before I was born. World War II felt like ancient history to me in the 60’s, but it wasn’t. I remember the day Kennedy was shot, a lifetime ago. And now I wonder if 9/11 feels like that to others: a lifetime ago.

The fifteenth anniversary of 9/11 is the Sunday after Labor Day. There will be tributes and parades, speeches and hours upon hours of documentaries. We might be tired of it all, but there is a generation for whom this is new. They may or may not learn about it in school. They may or may not have visited the sites in New York, Washington and Pennsylvania. It doesn’t matter. History isn’t limited to specific locations. It’s experienced by us all.

Tell them where you were when you heard what happened. Tell them what you think of when you remember that time. Tell them about the non-stop TV coverage and why you watched (or didn’t). Tell them stories about the bravery of first responders and volunteers whose health was destroyed searching for survivors and remains. Tell them about those who died that day. Tell them how the entire country pulled together, though briefly, after the attacks.

It’s up to us, the ones who remember, to share those memories. Don’t let politics get in the way. Just tell your story and answer their questions about the horrific events on that clear, blue Tuesday. And never forget the friends we lost.

Friend Grief and 9/11: The Forgotten Mourners is available from Amazon, Barnes & Noble, Kobo, The Grief Toolbox and Indiebound. For pricing on classroom orders, contact me at victoria@victorianoe.com
Prev Next