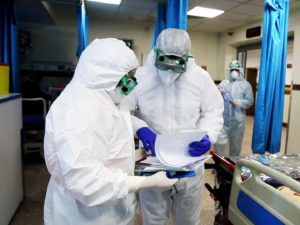 I’m not sure what the first trigger was. It might have been a picture like this one, medical personnel dressed in ‘space suits’ to remain safe from their patients.

It might have been ‘only certain people will get this virus, not me’.

It might have been stories of meal deliveries left on porches, or recommendations that counters and doorknobs be wiped down with disinfectants.

It might have been a Republican president indifferent at best to the suffering of those whose lives he did not consider important.

It might have been the blame, the pointing fingers, the demonizing.

It might have been the insistence of many people to carry on their lives as usual, no matter what the consequences of their actions.

At the beginning of March, I thought I was the only person who felt a persistent, nagging sense of déjà vu. The beginning of the AIDS epidemic was almost 40 years ago. The coronavirus pandemic is not the same (a frequent topic of heated discussions on Facebook). But there are enough similarities that those of us who remember those dark days are now experiencing waves of grief and yes, anger.

“Do you think that your experiences in the AIDS community are affecting how you feel now?” my therapist asked last week. My first reaction was “Well, duh.” But since then, that question has been guiding me, for better or worse.

One of the lingering behaviors from that period of time is that if I don’t hear from a friend for a while, I assume something terrible has happened to them. Maybe not dead, but something really bad. It certainly comes from that time when people often disappeared, their names surfacing only when you saw their obituary in the weekly LGBT paper. People died quickly then. The speed at which they died was stunning, though they were lucky. Others lingered for months, in and out of hospitals where they were treated like lepers, sometimes dying alone.

Last week I started contacting all the friends I hadn’t heard from lately. A series of emails, texts, phone calls, Facebook messages assured me that all were alive and mostly well. Many of them have conditions that put them at risk if they contract the coronavirus. The friends in New York worried me the most, but I was relieved to hear back from all but one. That one I’m still worried about.

I told my therapist that I expect that someone I know will die from this virus, maybe more than one someone. It might be one of those people who’s already at risk. It might be someone who was otherwise healthy. That kind of surprise is what I fear the most.

It’s easy to be on edge these days. Our world is full of unknowns, even more so than usual. Our routines have been upended, our finances shaky at best. We all know people who have lost their jobs, maybe their businesses, too.

The whole world is grieving for the losses that mount each day along with the bodies. And as much as we try to pull together - and we have - it would be a mistake to ignore the sense of loss we feel.

My therapist asked what I do when I’m triggered, now an everyday occurrence. I told her that I stop what I’m doing when I have these moments, these flashbacks. For too many years, I pushed those thoughts aside, buried them deep inside me so that when they finally came out, I was overwhelmed. Now I acknowledge them and take a moment to remember that terrible time when my friends were dying and damn few people cared. And then I shift gears. I do something else, go for a walk, do the laundry, post links to resources that my friends can use: anything that feels productive. The moment passes, but it’s not ignored, because I learned the hard way that ignoring isn’t healthy.

I see a lot of my friends, long term survivors in the AIDS community, who are similarly triggered. They were the ones I reached out to first. I can’t tell them how to deal with this because we all face grief and trauma in our way. But I hope they know I understand, that I’m willing to listen and help in whatever way I can.

When this is all over - and it will be someday - we will gather again to hug and kiss and dance. We’ll marvel at how we survived not one but two pandemics. And then we’ll dance some more.
Prev Next