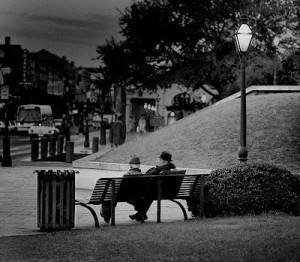 The title of this week’s blog post is one of my favorite Simon & Garfunkel songs. I was a teenager when the song was released, and the old friends sitting on a park bench were not people I related to. They were...old. They were slow-moving. Nothing like me or my friends.

But time has a way of changing things. There are friends in my life who I’ve known for decades. Some have stayed in my life continuously. Others - and I think this is more typical - have moved in and out. But as I get older, those friends are the ones who have moved closer.

I’ve watched my 88 year old mother’s world shrinking as friends and family members die. But there remains a small group of old friends, people she’s known since, well, World War II. They share a unique comfort level that I feel with my own friends. It’s not just that you speak in a kind of friendship shorthand or finish each other’s sentences. It’s more.

My friends remind me of who I was in high school, in college, in my theatre days, in my fundraising days. They remind me of reasons to be proud and reasons to cringe. They stand by me and refuse to let me criticize myself. I do the same for them.

And although we’re ‘at that age’, the truth is that I’ve had reason to grieve the death of a friend many times over the years. First the Vietnam War, then the AIDS epidemic, then various cancers, the flu and 9/11.

Nothing prepares you to lose a friend, no matter the age. Though the women in my writing group were all 20-30 years older, the deaths of two of them still shook me.

I remember walking into my friend Delle Chatman’s apartment a few weeks before she died. She’d already discontinued cancer treatment, her third bout of ovarian cancer proving too much for her tired body. And though she was at peace with her decision, her friends were not.

She greeted me at the door. “Do you want to see my urn?” She pulled a shiny cobalt-blue urn from her front closet.

Oh, hell, no, I wanted to say. Instead I told her it was beautiful. It was, but that wasn’t the point. I didn’t want confirmation of what was to come. Unlike some of her friends, I wasn’t angry that she’d decided she’d had enough, that she was ready to die. I just wasn’t ready to let her go.

As it turned out, I didn’t have to worry. After her death - beginning with her unforgettable memorial service - she would occasionally make her presence known to me. Sometimes I do hear her voice. A postcard she sent me from Paris, which has remained in the same place on my desk for almost 12 years, occasionally falls over for no reason. I do know the reason: she wants to be sure I know she’s with me.

Those old friends make their presence known in other ways. They email if they haven’t heard from you: “You’ve been quiet. Are you okay?” They share contacts and resources when you find yourself in the midst of a crisis. They send stupid photos via Facebook Messenger that they know will make you laugh out loud (preferably in a public place so strangers stare at you) when there’s nothing else they can do to make things better. And some of them give Olympic-caliber hugs when you need them the most.

I read an article a while ago by a writer who admitted he couldn’t find the time to meet a friend for lunch, but did make time to go the friend’s funeral. He wasn’t bragging. He was distraught that he’d come up with stupid reasons for not making 30 mile drive to see his buddy. Now it was too late.

It’s too easy to blow off friendships, no matter how much they mean to us. But it’s not too late to make a New Year’s resolution to keep your friends close: to lean on, to let them lean on you, to let them know they’re loved.

That’s a New Year’s resolution that everyone can keep.