What's Your Word of the Year? 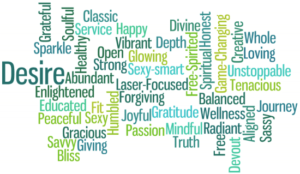 A lot of friends of mine have decided to pick a word as their theme, their mantra for 2018. Some have chosen interesting words like ‘fearless’ or ‘joy’. Mary Schmich, in the Chicago Tribune, shared some of her readers’ choices. For a while, the whole thing struck me as silly.

I don’t make New Year’s resolutions, though I am fond of to-do lists. I made a list of goals for my writing this year. I will probably fall short, but that’s okay. I’ll be happy if I only meet half of them because that will mean that I’m working smarter than I did last year.

Having said that, the idea of picking one word for my mantra started to intrigue me. I thought about what’s going on in my life: not just my writing, but personal issues. Some are things that can be fixed/solved. Others cannot, and that means I have to adjust my expectations. But as I confront some very uncomfortable realities, even as I look forward to the publication of my next book, a word popped into my head.

Yeah, I didn’t think it was a word, either. But I looked it up. Regretless means 'having no regrets'.

I don’t believe it’s possible to live a life with zero regrets. When he was 87, my friend Pierre insisted he had no regrets in his life. I didn’t believe him, either. We all do things that are stupid or mean or dangerous, especially when we’re young. And we regret doing them. Sometimes we even regret doing something nice when the other person is less than grateful.

But the more I thought about it, the more I realized that this is the word for me. Not only that, I realized I’d used it as a mantra before.

Sometime in the 1980s I remember considering what I was going to do - if anything - about the AIDS epidemic. Was I going to volunteer and if so, doing what? Was I going to work in the community? Was I going to get involved in the politics? For the first few years, I had no idea. I was still working in theatre and it was starting to affect gay men I knew from college and various productions. It seemed selfish and a little heartless to do nothing.

But at some point I made a conscious decision. I have no idea what prompted the thought, but I clearly remember thinking to myself, “I don’t want to look back and realize I did nothing.” In other words, I didn’t want to have any regrets.

In the past year, a lot of writers I know who were firmly apolitical have gotten involved in advocacy. They’re not just tweeting and posting. They’re contacting their elected officials, marching, organizing and writing about it. They’re admitting - some for the first time publicly - where they stand on issues that are important to them (and no, not all of them are of one mind).

Last summer a friend who always advised other writers to not make their politics known, said, “We can’t be silent anymore.” He was going to use his platform for advocacy. On some level I think he felt the same way I did all those years ago: that he didn’t want to look back and realize he’d done nothing.

So that’s how I feel about this year. Whether it’s accomplishing my writing goals, helping my mother recover from a broken hip, staying in touch with my friends, or taking care of myself, I want to do the things that are important to me. Some - like most of my to-do list - will be easy and relatively painless. Others will take every ounce of emotional strength I can muster. I may still fall short, but I’ll know it won’t be for lack of trying.

And whatever I do accomplish, I hope that I’ll recognize that I tried, and made progress on my goal of being regretless.