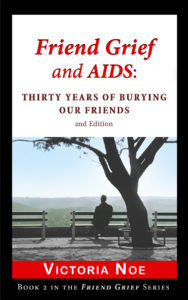 I checked the calendar, so I know it’s true. It’s been four years since I published Friend Grief and AIDS: Thirty Years of Burying Our Friends. A lot has happened since then.

Some of the most recognizable people in the AIDS community, like Peter Staley and Jim Eigo, have become friends. I’ve attended AIDS conferences and meetings in New York, Chicago and Washington. I joined ACT UP/NY. I wrote freelance articles about the epidemic and won an award for one (2015 Christopher Hewitt Award for Creative Nonfiction). I make presentations about the epidemic and moral injury in long-term survivors. And I made a commitment to another, much longer book.

And though my life changed keeping the promise I made to my friend Delle Chatman in 2006 – to write a book about people grieving their friends – this book changed my life even more.

I’d backed out of the community in 1994, emotionally burned out. All of my energy was focused on my beautiful baby girl. In 2011, when Tracy Baim of Windy City Times asked me to contribute a piece to their “AIDS@30" series, I wasn’t even sure I could remember my experiences. But I did remember - a lot. And not all of it was good.

Some of it wound up in this book. Some of it will be in the new book, Fag Hags, Divas and Moms: The Legacy of Straight Women in the AIDS Community. But the commitment I had in the dark days of the epidemic reignited four years ago.

Since it first came out, I’ve updated the statistics at the end of Friend Grief and AIDS. But this year it felt like it was time to do a little more than that. The second edition includes not only current statistics, but new resources and content. There have been developments in the community: PrEP, long-term survivor issues, women at risk, etc. And though I touch on them, there is much more to be learned and shared.

So today the second edition of Friend Grief and AIDS: Thirty Years of Burying Our Friends is on sale. For those who don’t remember the beginning of the epidemic, it’s a wide-ranging introduction to what made those days so frightening and infuriating. For those who do remember, it’s a small reminder of the hell we survived and why we continue to fight.

I was at an author fair at a library in central Illinois a year or so ago. One man looked at this book and asked, genuinely curious, “So what’s going on with AIDS? You never hear about it anymore.” So I proceeded to tell him about PrEP: that a pill had been developed that was 99% effective in preventing transmission. He was eager to know more, surprised that he hadn’t heard of this. But I knew for a fact that there were people living with HIV in his community, probably invisible to him.

So the fight continues, every day, in ways that are as dramatic as thousands of people marching in the streets of New York and as common as a one-on-one conversation in a rural public library.

That’s also why the sales of this book continue to benefit one of my favorite organizations, Broadway Cares/Equity Fights AIDS. None of this “a portion of the sales” bullshit: 25% of your purchase price goes to them. And I’d like to write them a much bigger check this year.

You can find Friend Grief and AIDS: Thirty Years of Burying Our Friends on Kindle, Nook and Kobo (paperback next week). And I hope you'll check it out. We have come a long way since the panic and paranoia of the 1980’s, but there’s still a long way to go. Get a copy for yourself. Get one for a friend. Because as we found out early on, when the government, businesses, religious institutions and even families abandoned the dying, friends made all the difference.

And they still do.
Prev Next