The Disadvantage of Writing About Grief 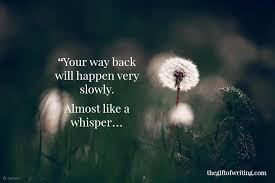 “Well, you write about grief, so this is…”

The woman at my mother’s wake didn’t finish her sentence. It just kind of faded with her shrug. She didn’t quite know how to get out of the hole she’d dug for herself. But I’m pretty sure the ending she was looking for was “easier for you”. I have to admit I didn’t offer her any help.

Many people who write about grief are trained, certified professionals. They’re psychologists, therapists, chaplains, counselors. For some of them, grief was what inspired their careers. The rest of us are not professionally trained. But we all have one thing in common: we experience grief. Everyone does, in their own way.

People have come to me over the past five years, asking for advice or referrals as they struggle with their own grief. I’m always happy to share resources, with the caveat that I’m no substitute for a professional grief counselor.

As a society, we run away from grief. Even as we insist that everyone grieves differently and at their own pace, we encourage grievers to move along. Grief - like death - makes people uncomfortable. Any kind of emotional pain is to be avoided. We try like hell to control it, to ignore it, to push it aside, but ultimately we can’t. Unresolved grief always bites us in the butt, sometimes years later.

When someone close to you dies,  in the short term you’re consumed with details. You have to focus on decisions that are time-sensitive, so you probably don’t feel like you have the luxury of grieving. And while that’s typical, grief is not a luxury. It’s a necessity.

When I first started writing about grieving the death of a friend, the working title of what I assumed would be only one book was It’s Not Like They’re Family. That was the reaction of a lot of people when you told them your friend died. They’d brush it off as less important than the death of a family member. But I’ll bet as you read those words, you’re thinking of a friend of yours - from the neighborhood, from school, from work - whose death left you reeling. Compounding your grief was the realization that those around you didn’t respect your loss.

I like to think things have changed, though I’m not willing to believe that my books have had much of an impact. But my writing has made me more sensitive to the friends left behind.

There were far fewer friends left when my mother died at 89 than when my father died in 2005. But the grief I saw in her oldest and dearest friend (they met in high school during World War II) will stay with me forever. They both outlived their husbands, who’d been friends since kindergarten. They could speak in that shorthand common to long-time friendships. And the grief is just as profound. “They’re having a party without me,” she grumbled with a shaky smile. That’s how it felt.

Writing about grief doesn’t making grieving easier, except maybe on an intellectual level. But grief isn’t intellectual: it’s pure emotion. I can step back and identify what I’m going through, but it doesn’t make it any easier.

It’s taken me awhile to get back to my writing. Post-concussive symptoms flared up even before my mother died, so that lengthened my physical recovery. A week after my mother’s funeral, my neurologist told me, “You need to get back to writing. But not yet. You’ll know when you’re ready.”

Since you’re reading these words, it appears I’m ready. Next week I’ll go back to the second draft of the book I abandoned at Christmas, when my mother’s health took a turn for the worst. My email newsletters will be back within the next few days. Honestly, I’m looking forward to it.

That doesn’t mean I’m done grieving. It does mean I’m in a different place. Did my writing help? I don’t know yet. It’s possible. I do know that my mother is always with me, just like my father, my grandmother and too many friends to count. And I’ll continue to take them along on this ride, wherever it takes me.
Prev Next