Why I Love Doing Research for My Books 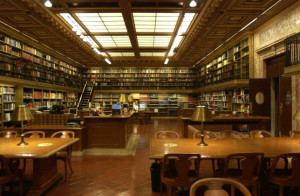 The one universal requirement when I was in grad school at the University of Iowa was a truly painful class, “Intro to Graduate Research”. The fact that it was held at 8:00 am three days a week  - while I was up late in rehearsal and production most of that semester - made it almost unbearable. I sat in the last row, my back to wall, with another theatre student, as we tried unsuccessfully to stay awake for every class. What I remember most were endless discussions of footnotes. That defined “research” for me that semester.

But things looked up the following semester. I was writing my comprehensive exams on the development of the director-choreographer in American musical theatre. In NYC for spring break, I went to as many Broadway shows as possible, interviewed Bob Fosse in his apartment near Carnegie Hall and made my first visit to the NY Public Library at Lincoln Center. When I walked in, I knew for sure that I was doomed.

Books were the least of the collection, then as now. There were scripts and scores, cast albums, programs, posters, photographs, filmed interviews and performances. There were artifacts, like the cigarette cases Cole Porter’s wife gave him on opening nights of his shows. It was an archive of theatre history that spoke to me louder than any class I ever took. “I could live here,” I remember thinking to myself. All these years later, I still feel that way when the elevator door opens on the third floor.

Writing nonfiction requires a special attention to research, an obligation to get the facts straight. When you’re researching a topic that is fascinating and complex, one that conveys deep emotions, it’s easy to fall down the rabbit hole. But, oh...the treasures you’ll find.

I’ve done a lot of research for my next book (Fag Hags, Divas and Moms: The Legacy of Straight Women in the AIDS Community). I could probably continue for years and still not be finished. That’s okay: it means I will have even more material for freelance articles and presentations.

There have been times, often in the Brooke Russell Astor Reading Room at the New York Public Library on 5th Avenue where silence is strictly enforced, when I had to cover my mouth to keep from squealing in delight. I’ve found documents written by friends, some living, some dead. I’ve found oral history interviews that brought tears to my eyes. I’ve found programs from memorial services and flyers from long-forgotten meetings, fundraisers and protests.

It’s too soon to share many specifics. I’m a little too superstitious to do that right now. Even if I am able to include the stories of over 150 women, there are many more stories that need to be told. I’m sure there are other writers out there faced with this same embarrassment of riches, as I’ve come to refer to it. I was really stressed about this for a long time. But now I’m not.

I’m grateful to have identified a topic that is bursting at the seams to be shared. What I feared would be a difficult subject to research has been the exact opposite. Not only easy, but a joy.

Sharing stories. What could be better?
Prev Next