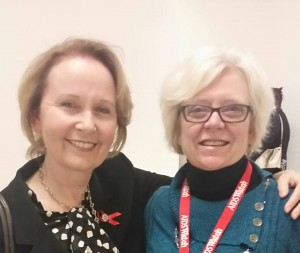 March is Women’s History Month and I decided to turn over my blog to a few women who will be in my book Fag Hags, Divas and Moms: The Legacy of Straight Women in the AIDS Community.

During the next four weeks (because there are five Tuesdays in March) you’ll meet four women. Some of them worked in the AIDS community in the early days. Some are active now in a variety of roles. Some are HIV+, some are not.

What you’ll learn may surprise you, because the role of straight women in the history of the epidemic is not one that’s widely known. In fact, “role” is a bit misleading.

They/we stepped up in many ways: caregivers, advocates, medical and legal support, spiritual support, fundraisers, educators and more. No matter what they did in the early days or do now, they all stepped up to fulfill one very important role: friend.

They were there, often in the background, continuing to maintain friendships and forge new ones. They helped, they grieved, they kept going.

I spent the past two days in Washington, DC at AIDS Watch (sponsored by the Elizabeth Taylor AIDS Foundation). Over 350 representatives from 35 states, Puerto Rico and the District of Columbia came together to advocate on behalf of themselves and others. Today we met with senators, congressmen and legislative aides on the Hill to make our case. My experience, at least, was overwhelmingly positive. I was pleasantly surprised.

The last time I did this was 1990, lobbying for passage and appropriation of the first Ryan White Care Act. This time was familiar and new, because this time we have a bigger toolbox. We know how to prevent infections and how to treat them, which made our discussions much more optimistic than a quarter century ago. We have not yet achieved an AIDS-free generation, but we’re getting close, much closer than we dreamed possible in 1990.

So, I look forward to introducing you to these women. They’re a formidable group. You’d be lucky to have them on your side. And now you’ll get a taste of the legacy my book will share. I know you’ll be impressed.

For more information on Fag Hags, Divas and Moms: The Legacy of Straight Women in the AIDS Community, check out my project page at the New York Foundation for the Arts. Donate $25 or more during March and receive the ebook or paperback of Friend Grief and AIDS: Thirty Years of Burying Our Friends along with a tax deduction.
Prev Next