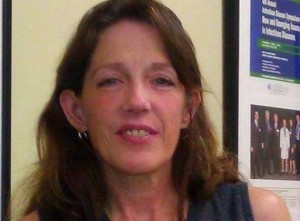 For Women’s History Month I’m sharing stories from women in the AIDS community. First up is Nancy Duncan, who I had the pleasure of meeting through ACT UP/NY. She is long-term survivor, an inspiration and a friend. My thanks to her for sharing her story.

Being a heterosexual woman in the early days of HIV/AIDS was very different than now. I’m 58 years old and have been living with HIV for going on 31 years. I was first diagnosed in 1990, infected by having unprotected sex with a man who didn’t know he was HIV+. I’d walked around for five years not knowing because I had no symptoms.

I didn't know anyone else who was living with HIV. I had support from my family and friends, though my 10 year old son was a bit freaked out at the thought that I could die at any time. It was hard telling him, but I had to because he knew something was very wrong. He cried and asked me a lot of questions I couldn't answer. The trauma he experienced over those years still haunts me.

I wanted to meet other women and men like me, but even at clinic visits there didn't seem to be any around. I went to a play at the People with AIDS Coalition hoping to connect with some others living with HIV. I walked in and an older woman volunteer asked me why I had come there so I told her I had AIDS. She looked surprised and then understood why I wanted to be there. Didn't really meet anyone that day.

I decided a support group would be my next attempt to connect with other people living with HIV. I felt the need to be with other HIV+ people because maybe they could understand first-hand how alone and terrified I was. I found one through a local ASO (AIDS Service Organization) in my community on Long Island: my first Wednesday night of many.

I peeked in the room and there were about 15 guys sitting in there waiting for the meeting to start. I hesitated to go in. I assumed they were gay and thought maybe I would feel out of place or make them uncomfortable. But I said to myself, no you must get out of your comfort zone and do this. So in I went, sat down and began to listen to these guys talking about things I never thought I'd hear others relate, too. They were happy to see me and made me feel so welcome. I bonded well with several of them and blossomed into amazing friendships.

As the months went by other women started to attend. People would come and go, get sick and many passed away. I felt like I didn't want to get close anymore and feel the hurt of losing them. Seeing them in their last days before they passed was very hard, and always in the back of my mind was ‘When is this going to happen to me?’ Will I be so emaciated and ill also? I attended that group for many years because it was indeed a life line that I needed to have. I could always feel safe about sharing my anxieties and fear in this group and knew that everyone understood.

I did almost succumb to the complications of AIDS several times in those years. Having support helped me get through it and I guess it just wasn't my time.

Fast forward to 1997: now the group was still thriving. Many had passed, or just left. But those of us who were still alive and remained were seeing hope for the first time in many years due to the birth of HAART (the anti-retroviral ‘cocktail’). I myself felt better and looked better, and actually thought that I may see my son turn 18 as I had always prayed. I didn't want to give up my SSD because I wasn't cured, and didn't feel well enough to return to work, but wanted to do something constructive and make a difference in the fight against AIDS.

I joined a speaker’s bureau through the same agency and went out into high schools to share my story of how a newly divorced woman in 1985 would come to have unprotected sex with a guy who didn't know he was HIV+. It was a good feeling to know that even if only one kid in those classrooms heard my message, I could help save people from getting infected. I continue to remain very active in this mission.

I moved on to Planned Parenthood of Nassau County (NY) in 2004 as a peer educator and am still with them today. Personal testimony, street outreach and pre- and post-test counseling in our van are what I do now, plus a whole lot more! There are so many more opportunities now for myself and other women to work to make a difference in this fight.

Those early days were truly bittersweet. I still remember all the great guys I met in that group and think of them often. I'll never know why they are gone and I'm still here, but I do know that I'm very grateful and will continue to educate, advocate and mentor others until I can no longer or best yet until there is a cure!

Learn more about Fag Hags, Divas and Moms: The Legacy of Straight Women in the AIDS Community – coming in 2017 – here.
Prev Next