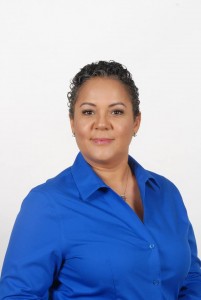 I had to go Washington, DC for the US Conference on AIDS last September to meet the amazing Rosa E. Martinez-Colon. If she looks familiar, it’s because we led a lively discussion on women and AIDS on World AIDS Day at Women & Children First bookstore in Chicago. This is her story:

I remember the first time I heard about AIDS was around 1984 or so; I was still living in Puerto Rico. A neighborhood friend who was an injection drug user died after a short stay in the hospital. The rumor spread rapidly that he had “died of AIDS” – “se murió de SIDA”. Soon after, a couple other neighbors died as well; coincidentally they were either sexual partners or drug buddies of the first person that had died. I did not pay much attention to it; it did not concern me at that time.

Fast forward to Chicago, 1993. While attending Northeastern Illinois University, a classmate, Saúl Maravilla, approached me and told me about a group of Latinos that needed a place to meet. I think he mentioned HIV/AIDS too, but that still did not resonate with me. At the time, I had a business along with Omar López, and we had a loft as an office, with plenty of space to share, so I offered the space gladly.

Now, Saúl also asked me to go to a training that was being offered by the now defunct Stop AIDS Chicago on Women and HIV. I was floored; I couldn’t understand why there was not more information available to women, even though we were also being heavily impacted by HIV/AIDS. It got worse if the information was needed in Spanish; there was barely anything available! I was hooked. I knew I had to do more, that I had to really get involved and make a difference. And with Omar’s help as well as that of other community leaders and people impacted by HIV/AIDS, we moved CALOR to the forefront of organizations providing services to Latinos impacted by HIV/AIDS.

It will sound weird to say that I miss those days. After all, back then most of our hours were spent with hospital visits or making funeral arrangements. That part I don’t miss at all. But I do miss the camaraderie of those days. I miss the fact that back then we were one force together fighting against a common enemy.

Back then for two hours on Saturdays we all gathered at our space, females, males, gay, straight, injection drug users, old and young, and spoke about the challenges of those living with HIV/AIDS and those of us doing our best to help. There were many tears shed, but also a lot of laughter, a lot of happy moments. There was food, music and celebrations.

Back then we still did not have that segmentation of populations that have come with funding streams. Back then I was recognized as someone that wanted to help, and my help was welcomed. Back then I was never questioned for being a straight woman providing HIV prevention services to gay men. What mattered back then was that the much needed information and services were being provided, that we all put forth our best efforts to make a difference.

Yeah, I do miss those old days.

A native of Puerto Rico, Rosa moved to Chicago in 1987 and became part-owner of an agency that helped immigrant acquire legal status. In the early 1990’s, she offered some of the agency’s space to a support group for Latinos impacted by HIV/AIDS. Soon after, CALOR was born.

Over the years, Rosa has been an integral part of CALOR’s transformation. From a weekly support group, CALOR has grown to offer 7 programs providing services to 6 different populations, including a 17-unit facility for individuals and families impacted by HIV/AIDS.

Rosa has been very active locally and nationally. In 2010 she was Community Co-Chairs for the Host Committee for the United States Conference on AIDS, which was held in Chicago in 2011. The following year, she was selected as an Ambassador to the XIX International AIDS Conference, held in Washington, DC. Most recently, she was elected Co-Chair of the National Latino AIDS Action Network. She also serves as member of the Steering Committee for the Alliance for Research in Chicagoland Communities, as well as with the AIDS Foundation of Chicago’s Service Provider Council, and the Case Management Cooperative Leadership Council.

To learn more about my book – Fag Hags, Divas and Moms: The Legacy of Straight Women in the AIDS Community – and how to support it, check out its page. Support the project during Women’s History Month with a donation of $25 and receive the e-book version of the book when it comes out in 2017.