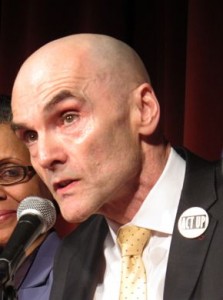 Jim Eigo, one of the men in the final Friend Grief book[/caption]

I hope you enjoyed my four amazing guest bloggers last month: Nancy Duncan, Rosa E. Martinez-Colon, Eileen Dreyer and Andrea Johnson. Their perspectives as straight women in the AIDS community were unique and inspiring. If you missed any of their stories, I hope you will check them out. They’re just a sample of the formidable women you’ll meet in Fag Hags, Divas and Moms: The Legacy of Straight Women in the AIDS Community. (By the way, you can support the extensive research for the book here.)

In a few weeks, the final book in the Friend Grief series will launch – Friend Grief and Men: Defying Stereotypes.

In addition to the book itself, I’ve posted a Pinterest board where you can see photos and videos of the men whose stories are featured: Everyone who receives my newsletter gets to read the e-book first – free. If you’re not already a subscriber, just look at the upper-right hand corner of this page and sign up (be sure to respond to the confirmation email). Every Wednesday you’ll receive a short, sweet, and hopefully entertaining email with information subscribers learn before anyone else.

In the coming weeks, I’ll reveal the cover (again, email subscribers will see it first), run a giveaway on Goodreads and share freelance articles related to the book.

And while it’s sad to complete the series, I’m excited about the way it’s ending. This book really completes the circle, as well as the promise I made to Delle Chatman ten years ago.