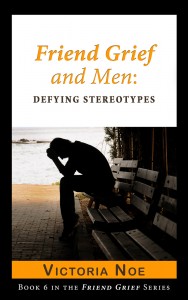 As I've said before, when I started this journey I believed that men would be difficult interviews. I worried that most of those I interviewed would have to be women. I was wrong on both counts. Tomorrow, June 1, is publication day for Friend Grief and Men: Defying Stereotypes.

I wanted to share an excerpt from the book here, but I was conflicted. Should I share the story of the friendship between two Chicago Tribune sports reporters? The three actors? Should I share a little from the chapter I’m most proud of, the one comparing military veterans and long-term survivors in the AIDS community?

In the end, I decided to share the dedication of the book. It was the first thing I wrote, in one sitting, in about ten minutes. That’s the thing about writing: sometimes (though not always) it comes easily. Luckily it did, because it guided me the rest of the way.

I hope it gives you a sense of the book: stories of men from their 20’s to their 80’s, gay and straight. Stories of men whose friends died on the battlefield, from a frightening virus, from cancer or heart disease or accidents. Stories of men who struggled to go on after losing the men and women whose friendship helped define their lives. You might laugh at some of them; you might cry, too. But all will touch you, and I hope, inspire you to support men who grieve their friends. Here, then, is the dedication:

My father’s friends were loud, sometimes profane, argumentative and fun. I was born in the 50’s so I still call them “mister”. I’ve never felt comfortable calling them by their first names.

You know how it is with the generation older than you: they’ve always been around and you assume they always will be. But, of course, that’s not true.

In 2005, Daddy was the first in his group to die, a few weeks before his seventy-seventh birthday. I don’t know how much they talked about his illness when I wasn’t around. I do know that as shocked and worried as they were about his prognosis, they did not abandon him.

In some ways, they did what a lot of men do when something bad is happening: they ignored it. They were still loud, profane, argumentative and fun. That had to be a comfort to my father, even as he also pretended everything was fine.

And when it mattered, they showed up – one within the hour – after we finally called in hospice care. Another – the loudest, funniest, most profane and argumentative – took one look at Daddy in his hospital bed in the living room and bolted for the front porch to fall apart.

They came to the wake and served as pallbearers. They picked up my mother for occasional group lunches. They took her out to breakfast.

The group is smaller now, and in a few years it will be gone completely. My father was a good friend to them and that love was returned, though not perhaps in ways that were obvious. I’ll always be grateful for their love.

This book is dedicated to my father and his friends: Mr. Guthrie, Mr. D’Angelo, Mr. Salmieri, Mr. Coughlin and Jake Taylor (the exception to the “mister” rule because he’s almost always referred to by his full name). Someday they’ll all be together again, to tease and joke and solve the problems of the world while drinking scotch and listening to Sinatra.

And that will be a very good day.

Friend Grief and Men: Defying Stereotypes is available in e-book format from Kindle, Nook, Kobo; coming later this week on iTunes. The paperback version will be out June 11.

To meet some of the men in the book, check out my Pinterest board.
Prev Next