In Praise of Librarians 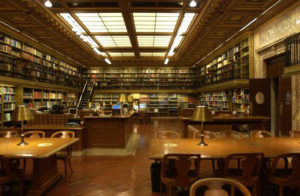 The Catholic elementary school I attended was too small to have a library, so every time my grandmother took me to the local public library I checked out the maximum number of books. I read a lot and always finished them long before they were due.

Sr. Rosemary was the librarian at my high school. She did not tolerate talking, laughing or other manifestations of bad behavior. Her glare was enough to stop anyone who didn’t have a death wish. Forty years later, I was sitting in the dining room of the nuns’ motherhouse in Kentucky when I felt someone staring at me. A nun a few tables over was watching me, with a look that instantly inspired fear: what did I do? It was her. It wasn’t until I approached her and she smiled that I relaxed.

Long after high school I worked as an independent rep for two different children’s book publishers: Dorling Kindersley and Usborne. For 15 years most of my customers were Chicago Public School librarians. I learned a lot from them, not just about sales or working within the CPS bureaucracy.

There wasn’t a ‘Marian the Librarian’ in the lot. They were and are fierce advocates for their students, scary smart and hard working. My willingness to serve those working in schools on the south and west sides of Chicago - when other publishers’ reps refused - earned me loyalty I didn’t expect. When their funding was tight I simply checked in and dropped off a catalog: “Let me know if I can do anything for you.” They told me more than once that they appreciated hearing from me without a hard sell. When funding came through, I always got a call. Though they understood when a concussion ended my sales career, I miss working with them.

There are fewer of them now, and not just because many retired. In 2013, there were 454 Chicago Public School librarians. The current school year has seen that number sink to 139. Most schools are without a library or a librarian. It’s a crime and a sin and it’s not only happening in Chicago.

When I started writing, I knew libraries would be important. I couldn’t possibly afford to buy all the books I’ve used in my research (though my overdue book fines have been significant). At least half the books have come from libraries.

Along the way, I’ve made friends with the librarians: the staff at the Edgebrook branch of Chicago Public Library, as well as the research librarians at the Regenstein Library of the University of Chicago, the New-York Historical Society, the Brooke Russell Astor Reading Room (pictured) and the Performing Arts Library of the New York Public Library. They will all be acknowledged for their contributions in my next book.

Why are librarians critical? It’s not just the knowledge in their brains and at their fingertips. It’s the way they work.

To check out archival material at the New York Public Library’s Brooke Astor Reading Room, you make a request online or in person. Depending on the items, it can take an hour to a day to retrieve. On a visit last year, I made my request for the following day before I left just before closing time. One of the items was an ACT UP oral history videotape. I went back to my hotel and had dinner.

Later that evening, there was an email from the librarian: “I’m sorry, but that videotape is out being digitized. I took the liberty of adding the transcript to your photocopy order.”

I didn’t even know there was a transcript. But that willingness to help someone who wasn’t always sure what she was doing meant a lot to me. It still does.

My grandmother came to this country from what is now Serbia when she was three. She dropped out of school in 6th grade to help her mother with the younger kids. I think she liked school, even though the teachers made fun of her accent.

She made up for the lack of schooling by reading. She got books from the library and in the mail (Reader’s Digest Condensed). When I was old enough to read, she shared them with me. I remember her telling me that the best jobs were nurse and librarian, because you were always helping people.

She was obviously right about nurses. But I know for sure she was right about librarians, too.