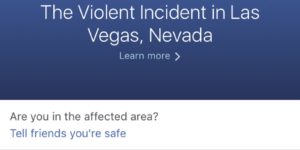 Safe from what? Is that some kind of joke? It was not a joke: he was in Las Vegas.

Then a friend also posted, “Marked Himself Safe”.

But the person I first thought of, a friend of 18 years who lives in Las Vegas, did not post anything. She used to work on the Strip and goes to a lot of concerts. There was no post.

After 9/11, there was no easy way to find out if friends or family were safe. Phone and internet service was spotty and unreliable for days. It took me until Thursday night to track down most of my friends in New York. It wasn’t until Friday - three full days later - that I found out that another one was missing.

A website went up so that people could list themselves as survivors. But it quickly turned into a joke, with people listing Osama bin Laden, Donald Duck and Chuck Norris as “safe”.

There’s a Facebook page: “The Violent Incident in Las Vegas, Nevada”. It asks if you’re in the affected area and if you’re safe. It lists your Facebook friends nearby, with a notation if they’ve marked themselves safe. There are links to community support services and news feeds. It is - like the pages for other events - quite comprehensive. (People can always mark themselves “safe” as a joke, but the page itself only shows your friends who are actually in the area.)

I sent a message to my friend, rather than post on her page. Not long after, she responded. She’d gone to bed early and was waking up to the same horrific news.

She marked herself “safe”.

It’s too easy, in this 24/7 instant news cycle world, for misinformation to spread. That’s why I sent a private message rather than a post on my friend’s page. Because if, God forbid, she’d been a victim, I didn’t want to take a chance that her family would find out that way. We may think sometimes that we have a right to news about our friends, but we have to wait for the families to take the lead. We are not the priority in a crisis.

I used to think those “Marked As Safe” posts were stupid: a way for people to get attention in the midst of a tragedy. But now, for the first time, I see the obvious value.

Next time there’s a hurricane or flood or tornado or man-made tragedy, there will be a Facebook page set up like the one for Las Vegas. Check that page first, before bombarding your friends with texts and phone calls. Take a deep breath. Say a prayer.

And while you’re at it, say another prayer that these pages cease to become necessary.