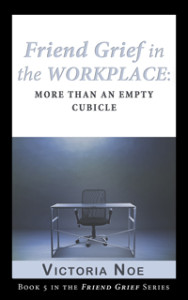 Today – finally – the latest book in the Friend Grief series is officially available for sale.

Friend Grief in the Workplace: More Than an Empty Cubicle is about the impact of friendships we make at work.

As I’ve said before, it’s a very broad definition of workplace. I listed some of them here. But I’d like to share one of the stories, this one about the St. Louis Cardinals baseball team (in the interest of full disclosure, I’m a lifelong fan – but that’s not why they’re in the book). Here’s how some members of the team chose to pay tribute to their friends and teammates:

When Jason Heyward made the opening day roster for the Atlanta Braves, he was asked to pick a number smaller than the 71 he had originally been assigned. He picked 22, to honor his high school catcher.

Andy Wilmot, Tammie Ruston’s only son, played on the same 2005 high school state championship team with Heyward. A year after the championship, Wilmot was killed in a car accident.

“This is for [Tammie Ruston] and her son,” Heyward told MLB.com on the eve of his major-league debut in 2010. “He was one of my teammates and one of my good friends. This is not something I’m saying, ‘Hey, look at me, and this is why I’m doing it.’ It means something to me, and I knew it would mean something to her and it always will.”

But when Heyward was acquired by the St. Louis Cardinals in a four-player trade in 2014, his decision posed a dilemma: Manager Mike Matheny not only wore 22 when he was a catcher for the Cardinals, but also as its manager. His charity is named Catch-22. But Matheny knew the story of why Heyward chose the number. That’s why on opening day 2015, number 22 was assigned to a right-fielder, not the manager.

This decision was not the only number change for the team. Matheny’s new number is 26, the hockey number worn by Sean Glanvill, who died seven years after a traumatic brain injury suffered in a hockey game at the age of 12. Glanvill was the son of close friends of Matheny. That meant closer Trevor Rosenthal, already wearing 26 on his uniform, switched to 44, which had been worn by Carlos Martinez. Had been?

During the off-season, Carlos Martinez was given permission to change his number from 44 to 18, the number worn by his teammate and close friend Oscar Taveras, who was killed in a car accident shortly after the end of the 2014 season.

If all of this makes you dizzy, it should. Changing the number you are assigned as a professional baseball player is not only unusual, but expensive. Baseball jerseys and t-shirts are a lucrative source of income, and players are expected to purchase the inventory of shirts with their old numbers. But that expense did not dissuade any of the Cardinals from honoring their friends.

So there you have an idea of the kinds of stories you’ll find in my book. Some are quiet, like the friendship between Sr. Mary Luke Tobin of the Sister of Loretto and Trappist monk and author Thomas Merton. Some are very public, like the stories of race car drivers coping with the death of their friend, Dan Wheldon. None compare to the sheer theatricality of director/choregraphers Bob Fosse and Gower Champion, who both died on the opening night of their final shows.

But all have one thing in the common: the unique and complicated bond between coworkers who are also friends. The depth of those friendships may surprise you. But I guarantee, they will inspire you, too.

You can find Friend Grief in the Workplace: More Than an Empty Cubicle in paperback and e-book on Amazon, Barnes & Noble and Kobo. Coming soon to IndieBound and The Grief Toolbox.