What I Learned at #WDC15 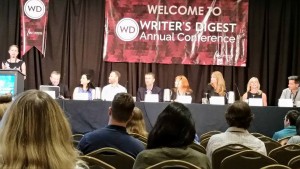 I don’t attend a lot of writing conferences. When I do, I have very specific goals. Maybe there’s a keynote speaker I want to hear. Often the workshop topics are ones that I need to learn more about. Always it’s because I believe there’s something valuable to learn. Rarely have I been disappointed.

It was the first writers’ conference I dared to attend. I knew next to nothing about writing or the business; in fact, I started tweeting for the first time on my way there. My blog, Friend Grief, debuted a week later.

But that weekend – and during an online course I took soon after, taught by one of the conference presenters – I met a wildly talented group of people. I consider myself the luckiest woman in the world to call them friends, mentors and inspirations. They know who they are, but I’ll call out some of them anyway: Kathy Pooler, Jeanne Veillette Bowerman, Porter Anderson, George Davis, Gabriela Pereira, Dan Blank, Karl Sprague. We’re never all together at once, though the various groupings always promise lively conversation. I would not be where I am today without them.

This year, for the first time in three years, I pitched a book. It’s a daunting project: a year of research which will include travel, as well as dozens of interviews. The people I’ve already talked to about it have been universally enthusiastic. Two bookstores have committed to events that will be held in 2017. Like I said: daunting.

I went into the pitch slam with the knowledge that although I was starting something new, I had enough experience to be less intimidated than four years ago. A pitch slam, for those who are unfamiliar, is like speed dating for authors. You have three minutes to convince an agent that they want your book. In short, it’s terrifying.

You research the agents for those who are interested in your type of book. You plan a strategy: a session is 60 minutes long and there are over 100 other authors who are also pitching. You stand in line in front of each agent’s table and wait your turn. If it’s a long line, you move over to another, shorter line in front of an agent also on your list. If you’re like me and write nonfiction, you’re relieved because most of the people pitching have written fiction.

I wound up talking to four agents. What I wanted – because I’m so early in the process – was feedback. I knew I could go one of two ways with the structure. One agent said it wasn’t for her, which didn’t surprise me, but her suggestions were valuable. Two want a proposal when I’m farther along. The fourth – who I didn’t plan to pitch – was the most enthusiastic. He, too, gave the same reaction as the other agents to my structure question, confirming that my initial instincts were correct. When I told him I wasn’t ready to send a proposal, he handed me his card and said “keep in touch”.

What’s important when pitching an agent or publisher – or reader – is finding people who also feel passionate about your topic. I began my pitch and his jaw dropped. He kind of bounced up and down. And while the other two agents were interested, he was passionate.

A nonfiction book proposal is basically a long pitch – a selling tool. I realized afterwards that I have most of mine already finished. I’ll rely on the friends mentioned above to tell me when I’m ready to send it.

When I went to that first, intimidating Writers Digest Conference in January, 2011 I made a vow: check my ego at the door. I would not hesitate to admit ignorance, nor would I avoid asking for help. Eventually, I learned enough to pass along, in hopes that others can avoid my mistakes. But I never, ever hesitate to ask for help.

So, what did I learn? First, my instincts about my book are correct (we all need validation).

Second, there’s always something to learn. I attended my first fiction session, on building characters (I want to be sure that the real people in my books come to life on the page). I also learned that I like speaking at conferences, even if only for five minutes (about being chosen for Library Journal’s SELF-e national curated collection) 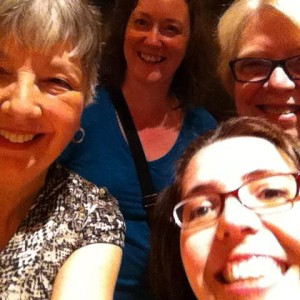 And third, that those friends – and the new ones I made - are still important to me. Whatever happens in my career, they get the credit. Because what Vaughn Roycroft said in the Writer Unboxed session is true:

“We write alone, but no one succeeds alone.”