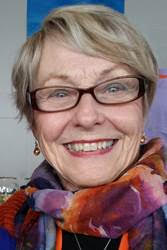 If you've read my book Fag Hags, Divas and Moms: The Legacy of Straight Women in the AIDS Community, you were probably surprised by the story of Trudy James, a hospital chaplain in Arkansas in the late 1980s. I know her story surprised me, too! She is now a leader in the field of death and dying, as well as grief and loss awareness. In the first of two guest blogs, Trudy shares an email she sent out on March 30, not long after the lock downs began:

I was enjoying a long-anticipated vacation in Italy with my friend, Jane. We were visiting my son and daughter-in-law who were planning to live in Umbria (mid-Italy, not the North) for five months. Having a great time. So much to enjoy in Italy: views, holy places, history, food!

Then, after five days, our trip was cut short by virus news. Flights from Italy were being cancelled. We needed to leave while we could. All four of us flew from Rome to LA to Seattle on Friday the 13th; ; We have been in self-appointed quarantine ever since. Like almost everyone is experiencing now.

The Covid-19 crisis triggers my memories of the AIDS crisis. Some of you remember those times also. I was a new hospital chaplain working in Arkansas. There was so much fear of a new, fatal disease with unknown causes. Denial, stigma, isolation, lack of a government response—sound familiar?

I worked with HIV/AIDS patients, and AIDS CareTeams, for twenty years. The lessons I learned from AIDS about death and dying, grief and loss are what led me to Speaking of Dying: the film and the workshops. Today I want to share with you a few of the lessons we learned together from AIDS—valuable lessons we seem to be learning again from the Covid-19 virus: In Speaking of Dying Workshops we use candles and poetry to help us go deeper into the mysteries surrounding the end of life—to connect us with our hearts and spirits. So I want to share with you two poems about this pandemic time. You may have already seen them. Even so, please take time to read them slowly now to yourself. Sit in silence. If you like, light a candle.

Later you may want to forward them to others. We are all going through this together—all One.

Trudy James, a graduate of the University of Kansas and Union Theological Seminary in New York City, is a retired multifaith hospital chaplain who spent 20 years creating faith-based volunteer CareTeams for people living with HIV/AIDS—ten years in Arkansas, ten in Seattle. When she retired, she created a business called Heartwork. She has received many honors for her leadership in death and dying and grief and loss awareness. Producer of the documentary film, Speaking of Dying, she is also a speaker, workshop facilitator, trainer, retreat leader and consultant regarding issues of grief, aging, caregiving, living deeply, and dying well.
Prev Next