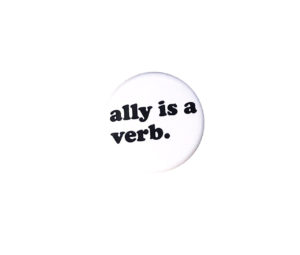 There have been countless discussions - in person, online, on TV - about how white people can be effective allies for people of color. These are not always easy conversations.

Last fall, I attended a one-day conference on race in the HIV community. At least 85% of the attendees and speakers were black; I was conspicuously in the minority. I’d be lying if I didn’t admit that the discussions made me a little uncomfortable at times, even a bit defensive once or twice. That’s okay. I don’t believe these should be comfortable conversations.

Aside from the #PublishingPaidMe thread on Twitter (which has been eye-opening but not surprising), what other ways can white writers be effective allies for writers of color?

Well, first, you have to be sincere. There’s a lot of talk right now that’s just that: talk. People who figure they’ll say the right things, maybe go through the motions, but as soon as the nation’s attention has shifted, feel that they’re off the hook. If you don’t want to be an ally, that’s a whole different conversation and frankly, I’m not interested in having that discussion with anyone right now.

You can start by elevating black writers. There are a lot of obvious ways to do that: buy their books, write reviews, recommend them. Ask them to guest post on your blog. But first you have to find them. They’re not hiding, so check out some of the comprehensive lists being shared online. Google it. It's not hard.

Now, which writers? There are lots of recommendations right now for anti-racist books, for books that spotlight the black experience, particularly in the US. Start there. But here’s a tip: look for black authors in your genre. Believe it or not, black authors write romance, science fiction, horror, self-help, inspirational, sports, children’s. Black writers write all kinds of books. Don’t pigeon-hole them in a social-activist corner (unless that’s what most interests you).

Next, consider events - the online ones, too. How diverse is the speaker list? If you’re invited to participate in a panel, who are the other writers on the panel? Most of the ones I’ve been on have been lily white and mostly men. This is where the previous suggestions come in handy, because you may be in a position to recommend someone to teach a workshop, deliver a keynote or speak on a panel. But you can’t elevate writers of color in those ways if you don’t know who they are. It’s up to you to find them.

I’m currently working on the audio version of my latest book, Fag Hags, Divas and Moms: The Legacy of Straight Women in the AIDS Community. My progress was stalled when the virus lockdown started. No, I’m not narrating it myself. Two degrees in theatre are no guarantee that I can be a good narrator; stage performance and narrating are two different skills. (Plus, I’m still traumatized by my voice and speech teacher from college, and would not be surprised if he sent me notes on my pronunciation.)

Findaway Voices had already suggested a group of five possible narrators, including audio samples. After reviewing all the candidates, I then request an audition tape, where they read the opening chapter of my book. When I went back to the list to review the list, one very obvious fact jumped out at me: all the women are white.

Well, so am I. So what? I decided this was one of those opportunities to prove that I’m an ally. Because there is absolutely no reason why my narrator has to be white. After all, not all the women in my book are white. So I emailed Findaway and requested five more (not an unusual request in this stage), but this time, women of color. Within one business day, I had talented women of color to consider.

I haven’t made my decision yet. I may ask for more to consider. But I’m leaning toward a woman of color. I’m not gonna lie: I probably wouldn’t have done this three months ago. But I realized that being an ally means being deliberate, being intentional, being consistent. It’s more than sharing posts and memes on social media. At least it should be.

So that's my example, one tiny example of how to be more of an ally. I hope you can find a lot more ways to change the conversations and enrich the writing community. Because that will benefit all of us.