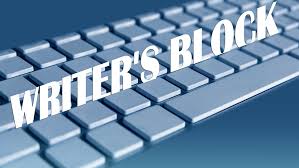 Writer’s block is something that most - if not all - writers experience at some time. Even non-writers recall the panic of sitting down to write a term paper and having no idea where to begin.

A writer friend of mine described her situation as scraping the bottom of the barrel. I’ve read her scrapings. We should all be so lucky to write scrapings like hers.

It may be news to some, but writers are human beings. Their lives are filled with the usual things: relationships, bills, traffic, grocery shopping, doctor appointments. Sometimes those things run smoothly. Sometimes they do not.

I know a couple writers who, while writing difficult memoirs, are experiencing health issues. I know one whose parent was dying while she did her best to write enough blog posts ahead of time to give herself some breathing room.

Since October 2016, I broke four bones in my writing hand (necessitating emergency surgery and 29 sessions of therapy), healed long enough to spend months making weekly 600 mile round trips to help my mother in her final illness, endured her death while completing duties as power of attorney and executor, and pretty much ruined my own health in the process. And that doesn’t count my daughter moving to London for grad school.

Through all that time, I was writing my next book. I was researching and interviewing women whose stories I wanted to include. I was applying for permission to use excerpts from other works, as well as photographs and posters.  I sent my manuscript to beta readers and survived the editing process with my new, wonderful editor. I cut back on my weekly blog posts.

Strictly speaking, I didn’t have writer’s block. I have a whole list of topics I can blog about at any time. I have quite a few people I’d like to feature on my blog. But sometimes, the well is dry: not the writing well, the energy well.

There are days when my post-concussive symptoms spike and there have been a lot of them lately. It’s like being in a fog, struggling to focus. Yesterday I spent well over an hour on something that should’ve only taken me about 20 minutes (it’s not done yet). All I can do when that happens is turn off the computer and rest my brain.

Writers can be ridiculously hard on themselves. The month of November brings NaNoWriMo (National Novel Writing Month), where writers try to crank out the first draft of a novel in 30 days. I’ve seen writers insist on Facebook and Twitter that they ‘failed’ NaNoWriMo because they only wrote 20,000 words.

When was the last time YOU wrote 20,000 words in one month? Yeah, probably never.

Maybe all this would be easier - and more fun - if we stopped finding ways to brand ourselves as failures and instead focused on what we were able to do despite obstacles.

Because if we did, the stories would not just make us feel better, but inspire others as well.